Last weekend was the club cross country race held in the Phoenix Park on a different course from last year. The committee had decided that it was better to move it to the same course as the multi-terrain race so that it could be made longer for both the men and the women.

The day dawned to rain and wind. This coupled to the rain that we had been having all week meant that the course was very wet with streams running down the gullies. We all went through the usual warm up routines and I decided to keep my gloves on as it was still pretty cold. A few strides into the wind reinforced this belief.

When the gun went off to start it, I moved easily into the lead and pushed on through the first river filled gully and back up the other side. During our warm up, we had done a lap and I had tried to pick a line through all the different sections. Going down here, I stayed right until about two-thirds of the way down where I went over to the left before the sharp left hand bend. This was to be my downfall on lap two. After the sharp left, we headed back up another gully and, staying right again, I moved on nicely before we got to the trees and a muddy slippy downhill. This was the same downhill we do every weekend in training, so I was confident of my footing and flew down it. Through some mud and water, we came next to a sharp right and a short sharp uphill. Then going left, we followed the Kyber Pass. There was a path (muddy and slippy) and a small ridge (drier but more uneven). I took the ridge on every lap and made distance each time. At the top of the Kyber, we went left again around the wood and left on to the Acres to finish out the lap.

I was still leading at the end of lap one. At the bottom of the gully, there was a little lip which I hit with my heel. Because of this my feet went out from under me and I slid the couple of metres to the bottom before recovering. This seemed to give Ciaran some incentive and he pushed me hard on the next uphill, taking the lead for a short time before the Kyber Pass.

Lap three was uneventful before I fell again on the last lap. This was at the bottom of the gully on the way back up. I went down on two hands and a knee and Ciaran saw his chance. I had opened up a small gap but he closed it and we were shoulder to shoulder up the gully. There was some small back and forward before we came up behind Stephen before the sharp right hand turn. I knew that right of Stephen was boggier and that Ciaran wanted to avoid it but I got slightly ahead and stayed as close to Stephen’s left shoulder as I could. This forced Ciaran wide and I got to the turn first. At the top of this, Ciaran made another move and went ahead. At this stage, my lungs were burning, my heart was thumping and my legs were about to give up. I had almost given in and settled for second until Ciaran went down from the ridge into the track. This caused him to lose some of the lead he had and gave me hope. I pushed on again and got ahead.

I was ahead then as we came around on to the Acres. Jimmy and Jonathan were ahead and I went left while Ciaran went right. I heard footsteps in a puddle speeding up so I had to go. I started to sprint (or as close as I could at the end of a hard race). Diarmaid and Paul were at the finish shouting us on, telling us both to run through the line and not to give up. I just made it home in first, two seconds ahead of Ciaran. Michael came in third, after closing some of the distance at the start of the fourth lap. 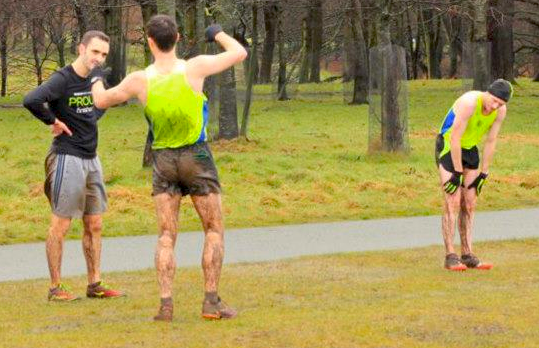 To top it all off, after scrubbing off the mud in the club, I had to go in to work but then met up with some of the others to watch the rugby and have a few well deserved pints. Great day, great result, lousy rugby.