Last night, I raced in the second Phoenix Park duathlon of the year. There was supposed to be a stacked field with the Irish Triathlon champion, the guy who came 12th in Ironman Lanzarote and a host of other fast people out. I only entered on the evening because I had forgotten it was coming up and I really didn’t think I would be all that fast overall. I really only wanted to go out and test my running, hold on on the bike and then see what I could do for the last run.

I got there early to register and there were no queues, picking up numbers in the Runways shop seems to have cut down the queueing hugely. After registering, I got changed and put my bike back together. Then I had to do a lap of the course to make sure that the bike was running okay. It was ticking along nicely and just begged to be ridden faster.

I racked up and started my warm up after one lap. Figuring out where I had racked my bike and how far I had to run in transition is always important and I did a couple of dry runs to make sure I knew where I was going. A bit of a jog and then a few strides and I was ready to go.

The race start is usually pretty fast as we start off downhill and well spread out. Everyone wants to run on the bike track so it’s a hectic start to get your place. I settled into a rhythm and was about 10th going to the first bend. At the second one, I flew past a couple more and I was moving up nicely 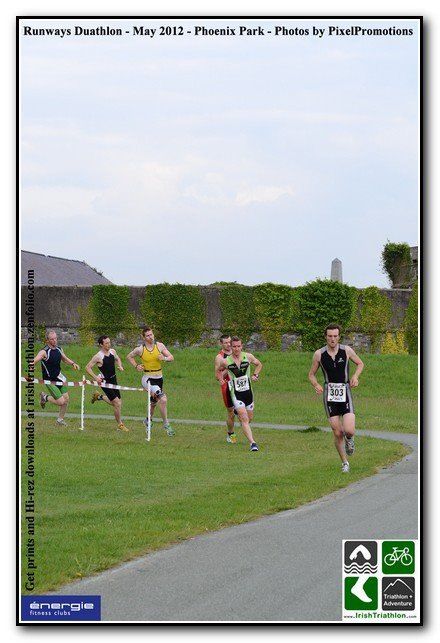 I was tracking the two big guns pretty well and we caught up with the early leader on the last straight. He stuck to me like glue and we both got into transition together. 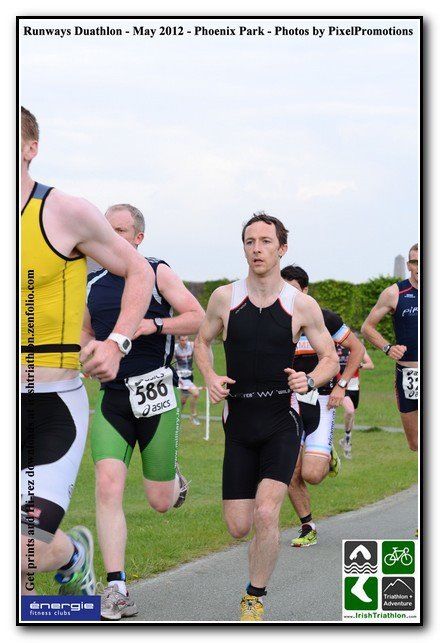 I knew I was going to be slower than everyone else on the bike seeing as I haven’t done any real cycling in months. I expected to be passed by about 15 people over the three laps. I think I was passed by 12 in the end so I wasn’t too far off. I found the cycle easy enough going, it didn’t take too much out of me, but I just couldn’t go any faster. Every time we hit a hill, the guys near me shot off into the distance. 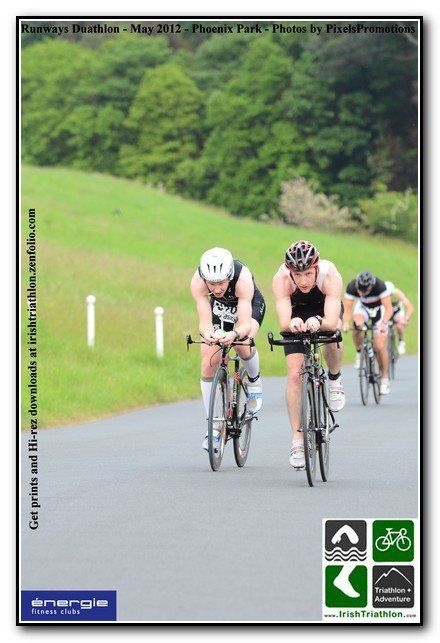 I was asked by two different people how many laps we had to do. I could have been mean and said just one more, but I’m too nice for that! I went into T2 with one of those guys just ahead of me. T2 was busy with some people from wave 2 wandering through and I don’t think they expected to be shouted at to get out of the way by two sweaty men.

Out of T2 and into the forest, this is the extra bit on the run compared to the first leg and usually adds about a minute to the second run time. When I got out of here, I could see that wave 3 had just set off. I had to negotiate my way through the wave and I didn’t have the breath to shout out so it was a bit of a slalom through any gap that opened up. Once clear of this group, I could see some of the guys from my wave. I managed to catch three or four pretty quickly and coming on to the last straight there was only one other guy that I could get to. I caught him and just kept motoring on through. It occured to me that it must be very annoying to be left standing still as someone goes running past you, in the same way I felt when they all went past me on the bike. 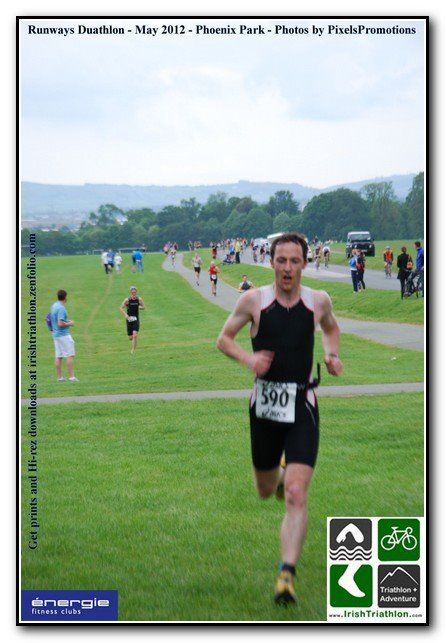 Coming up to the finish I was straining to make out what time was on the clock. When I saw it tick over from 38:59 to 39:00, I was over the moon. Finally I was going to break 40 minutes, my goal for the last three years. I finished in 39:16 and in 8th place overall. Given that I haven’t cycled, my 20 minutes for the 12.5km cycle was pretty respectable even if I did lose 3 minutes to the eventual winner. I can console myself that I had the third fastest first run and second fastest second run overall.