I used a Dublin Bike for the first time today. I had to get from Smithfield to the Mater Hospital and after walking it yesterday, I thought there had to be a better way to get there.

I took out a short term, 3 day, ticket. Or at least I tried to. I got through the credit card deposit section eventually after realising that I had to look at the small LCD display above the credit card slot instead of the large colour screen that gave all the instructions. This was the one asking for me to put in my pin code. Why they needed two screens for this, I don’t know.

So after it timing out a couple of times before I realised what was going on, I finished up and waited for the receipt with my access code to be printed. And waited and waited. No printout. Great, there’s €2 down the drain, I thought.

But then I saw there was a phone number to call. I called them and after a few minutes and me repeating the PIN that I chose, they were able to tell me that they saw my transaction and read out the access code. I put in the access code and my PIN and selected my bike and I was off. 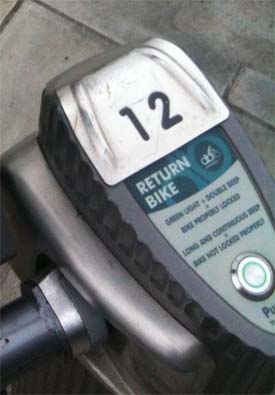 Not exactly, getting the bike from the rack is difficult if you don’t press the unlock button. I had a bag with me and as there’s a basket on the front, I decided to put it in there. I have never ridden a bike with a basket on the front and the handlebars were feeling heavy as it was so I was a bit apprehensive of this. Despite the weight, the bike handled well and everything worked nicely. No squealing brakes, no squeaky chain, good gear changes, brilliant.

The gears were a bit light for my liking but I still wouldn’t fancy taking on the Wicklow 200 or anything like that!

Leaving back the bike was simplicity itself. Find an empty spot and insert tab A into slot B. Wait until it beeps at you twice and that’s it.

It was the same on the way back to Smithfield an hour later. Hassle free transport around Dublin is possible. Now if they would only put a rack nearer to the Museum, I would sign up for the annual pass in a shot. 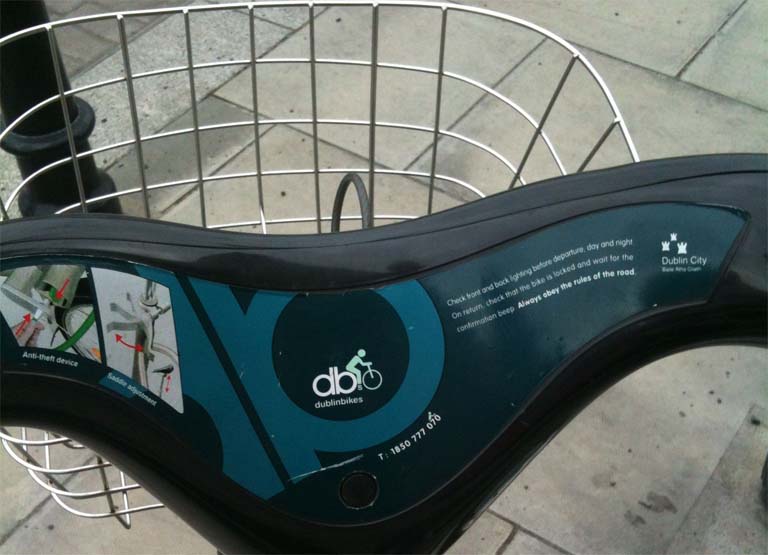 It seems to be a well used service too. While I was waiting on the phone three people came up with annual passes to use the bikes and two others were dropped off. Smithfield is right on the outside edge of the service so I would imagine that the inner city stops are even busier.