The first Dublin graded track meet was held on Wednesday last in horrendous conditions. There was wind and rain and it was more like a cross country race in the middle of January than a track race. I was running in the B grade 3000m which was the second last race of the night.

I did a warm up jog with Johnny and it was cold. But by the time we had it finished, the wind seemed to have dropped a little and it wasn’t raining as heavily. We did a few warm up strides, signed in and waited around for the start. We were told to keep our tracksuit on, take them off, put them back on again and finally take them off and get ready.

When the race started, I tucked in behind the front runners and worked away. At least I thought I did. It turned out that my idea of tucking in behind and actually tucking in behind meant that I ran at least five metres more per lap. I was on the outside of the lane and just behind the shoulder of the guy in front of me instead of right behind him. Something to remember for next time.

We went through the first lap in 74 seconds and then it slowed a little for the second. The third sped up again and I started to lose contact with the guys around me. For the next few laps a gap would open on the back straight which I almost closed on the home straight. This concertina effect took it out of me and the gap grew bigger on each lap.

Coming into the last two laps I was leading out at least one other guy and I was determined not to let him pass me. We got to the bell and as we were passing a back marker, I was clipped lightly but held my stride. I was even more adamant I wasn’t going to be passed now. Coming off the final bend, I struck for home and came in in 9 minutes 45 seconds for fifth place.

Johnny got stuck in no mans land after a few laps and had to run the race on his own, he came in in 10:40.

Next time out, hopefully we will get better conditions and we can both go on to break those times. 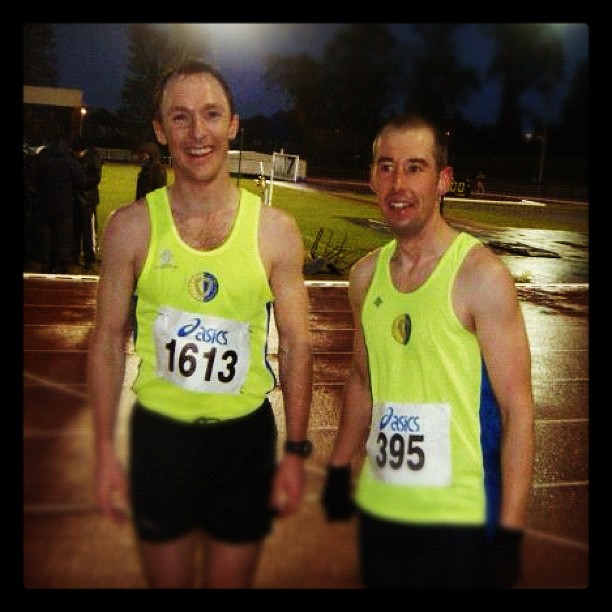