We were over in Mayo for Easter this year and Louise saw that there was a race taking place just down the road in Kilmovee on the Saturday. We decided to enter it as we’d be around. Here’s the report.

We arrived about an hour before the start and parked up before wandering down to the GAA club where we could pick up our numbers. On the way, we even saw three llamas in a field. They looked a little like giraffe sheep. After that we came back to the car and got ready. We did a few strides in the road outside the community centre and watched as the shuttle bus came past picking up more and more people.

With about 10 minutes or so to go, we headed off to the start. I was going to start in the front pack near the line and Louise was content to start a but further back. There was some faffing about as the photographers wanted to take some photos of Andy Moran, the Mayo footballer, who was starting the race.

After this and after making sure that the timing system was in place, we were started. My intention was to go out to find a comfortable group to bring me around for a good time. In the first kilometre, two guys were already striding ahead on their own. Behind that there was a group of around 10 of us. I latched in here and went through some scenarios in my head. Do I go with anyone that breaks off the front of this group and try to hang on, or do I hold back a bit and hope to pull through in the latter stages?

Coming up to the second kilometre, I had decided that I was going to stay with anyone that went off the front and try to hang on as long as I could. There were three of us together on the downhill section after the first corner and we quickly opened a gap on the others here. We were nearly stride for stride, 3 wide across the road for the next 5km. None of us took anything at any water stations or broke stride for any of the potholes or rough ground. The only thing that separated us for that section was the corners, but we were quickly back together again.

After about 7km, there was a sharp left hand bend which I took wide without losing much speed. I opened a small gap on the other two and kept up the pace as best I could. Over the next few hundred metres, one of the guys caught up with me and we ran together for the next 2km. At times we were close enough to brush shoulders as if we were trying to dominate the position on the road. Eventually I realised what was happening and moved over to the firmer surface for a while.

With less than 2 kilometres to go, I decided to throw in some surges to see if I could move ahead. I had been thinking about this strategy for a while, thinking back to what Tom O’Connor had told me about how to break free in a race. I was still pretty confident that I would have won in a sprint, but I wanted it to happen on my terms. I surged ahead three or four times and let him come back to me before going again. Once he tried to surge ahead of me, but I kept right beside him which probably affected his head a little.

He was still there with me as we were coming up to 600m to go and I was tempted to turn to him and say we should cross the line together but then I came to my senses!

With 500m to go, there was a steep hill. I pushed it a bit up here and tried to keep up the pace all the way up the hill. There was a guy with a walkie talkie near the top who radioed who was coming in to the finish line. He cheered me on and then cheered someone close behind me so I knew I had to keep pushing. Over the top of the hill, I started to sprint down the other side. About 200m to go with my arms pumping and my lungs burning, but I was intent on holding on to third place now. I looked up as the finish chute rose up in front of me and saw 34:56…34:57…34:58…

I crossed the line in 35:01, with the guy that was dropped at 7 kilometres coming in just 4 seconds behind me. He had managed to catch and pass out the other guy on the way up the hill.

Louise came in in 49:40, a time that she was disappointed in. She reckons she may have gone out too fast at the start or else lost concentration somewhere in the middle. There was also no one that she could use to pace along with which made it harder on her.

Louise’s parents and brother were at the finish line waiting for us and we all headed off to the community centre for a “mug of tea” and some hang sangwiches. We hung around for the prize giving and I got presented with a lovely cheque which really made my day. 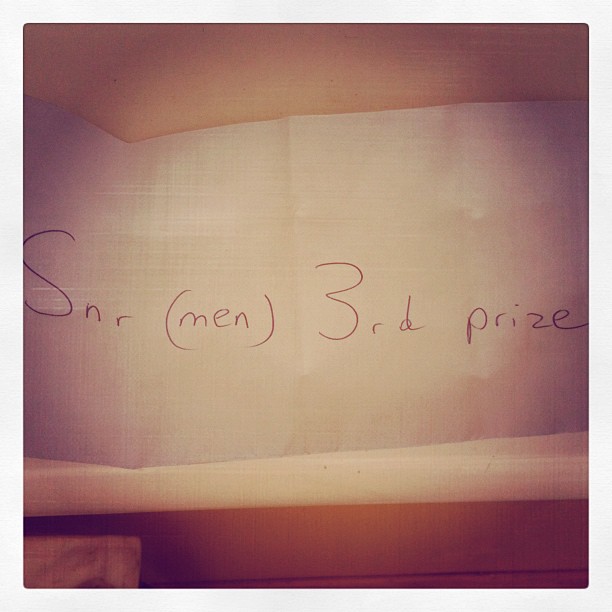