Here’s a short race report on the MSBAC 5k race from a couple of weeks ago.

This race was introduced to me as a good way to get a 5k PB time as it’s pretty flat and on decent roads around Dublin city centre. It was also after the cross country season had finished so being able to carry that base work into the race was going to help. 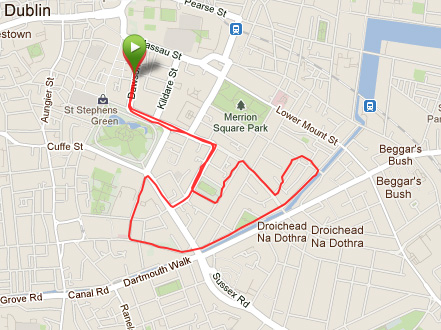 We met up at the clubhouse and jogged in to the start of the race on Dawson Street. Louise had to stop on the way as her legs got really sore and she ended up not racing because of it. I went on ahead to pick up the race numbers and met her when she arrived a few minutes after me.

The rest of the club were around by this stage so I went off and did a few warm up strides with Gavin and Johnny before coming back to the start line to line up. With a couple of minutes to go, I realised my watch had gone to sleep and tried to wake it up. It got stuck finding satellites and I wasn’t sure if it would find them before the race started. Luckily, about 5 seconds before the gun, it woke up and was ready to go.

I went off with the intention of finding a group to hang on to for as long as I could and quickly settled into a rhythm behind a group of about 10 or so. We went though the first kilometre in 3:06 which I thought was way too fast for me, but I hung in there. The next one was a little slower and we seemed to keep steady for the third. I was still feeling comfortable despite the elbows at every corner and the kerbs that kept jumping out of nowhere to try and trip you up.

There was great support from Liffey Valley club members that weren’t running and it really helped to keep the intensity up as I was starting to flag near the end. As we turned the corner on to Stephen’s Green, the group I was with pushed on a little. I wasn’t able to keep with them and lost between 5 and 10 seconds on them before the finish. I was getting worried at this stage that someone would come from behind me, so as we turned on to Dawson Street again, I managed to pick it up for the last few hundred metres before finishing in 16:19.

This was a PB of nearly 50 seconds on the last 5k I did back in December. If I can keep this improvement going, I’ll be flying by the end of the summer!