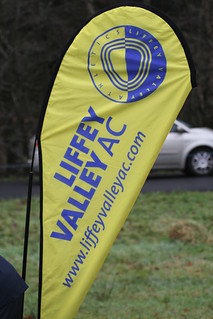 Last Sunday I raced in the National Intermediate Cross Country Championships in Lough Key Forest Park in Boyle. I hadn’t raced there since way back in secondary school so I was looking forward to getting back and having a go at it again. I had heard the week before that it was going to be wet but I had no idea just how wet!

We warmed up while the Masters race was going on and got a good look at the course. There were some very muddy sections and even the bits that weren’t too badly cut up were still very soft. Some quick strides to warm up and we were warned by some of the Masters runners to make sure that our shoes were well tied. They had lost theirs in the melee and didn’t want anyone else to feed the mud.

There was a little confusion as to how many laps we needed to do but it was eventually agreed that 6 seemed to be a good number. We lined up in the pens and without much waiting we were off.

I had decided to go hard for the first few hundred metres and then back off a little as we were straight into the hill. I was still feeling out the race after the first lap but it did cross my mind that I wasn’t going to be able for 6 of those laps! 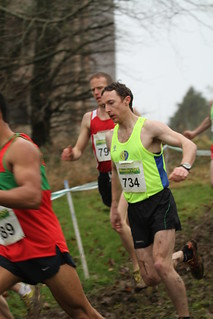 After the second one, I fell into a group with two or three other guys. We went back and forth into the lead over the next few laps and managed to catch one or two others on the way. On the second last lap, one of the guys we passed asked was that the last lap and wasn’t very pleased when I said we had one more to do. I was really in the zone at this stage and moving quite well on the flatter bits. I started to pull away each time but was dragged back in the mud and on the hill around by the tower. 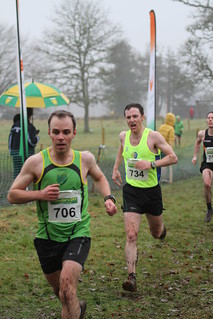 On the last lap, I decided that I was not going to lose any places and tried to pull away on the flat again. Unfortunately a guy from Rathfarnam clung on to me and out kicked me in the final straight to finishe just ahead. I did manage a sprint finish myself when I heard thundering footsteps coming from behind. Once again I was all spent when I got across the line but this time it felt like more of a controlled race. I didn’t lose any places over the middle laps like in the Leinster Seniors.

I finished in 42 minutes and 49 seconds for just over 10km in the mud which I was pretty happy with. The other lads finished shortly after and everyone was dead on their feet. At least we left it all on the course. 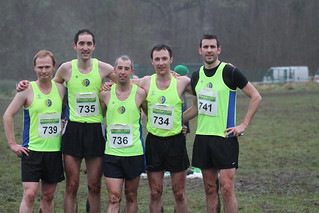