I started it, I finished it, I just am nowhere to be seen in the results. Why, you might ask. And rightly so. The reason is that I was running for someone else. Ronan decided ages ago that he wanted to run the marathon with some guys from work but between one thing and another he decided that he wouldn’t be able to put in enough training to finish it. I was going to do it anyway so instead of him being out of pocket, I said I’d take his place. Not entirely right and honest, but nevertheless.

So, how did I do? Well, a four minute PB for a start. Which isn’t to be sneezed at, especially when my longest run was 20km and there was only one of them. My other runs consisted of a few 10km and 12 km runs, but really only one a week. Some weeks I might have managed two. These also only started in the last four weeks.

My plans originally when I decided to do the race was to try and qualify for Boston which would have meant getting in under three hours and ten minutes. As the day got closer, I started to think more about whether this was a realistic goal. Sure I can run a half in 1:29 but was that enough? It then dawned on me that I would be qualifying Ronan instead of me, so that plan sort of went out the window. I still wanted to get under 3:10 but not as much anymore.

I also dabbled with the thought of cycling in to the start from Celbridge (a nice 24km) and then running and cycling home again. This was with a view to Ironman distance training for next year. Instead I sourced a lift to and from the start and cycled in to collect my number in the RDS on the Sunday.

To the race itself. This was the 30th Dublin Marathon and as such there was a very big crowd. 12,000 or so, I believe. This was handled very well by the organisers and we were marshalled to the start and kept entertained by a DJ. The weather was also organised brilliantly. After a week of rain and wind, we had nothing but clear dry weather and the sun even graced us with its presence once or twice.

Just as we were about to start I got nervous about the Polar footpod I was using and in the end turned it on and off about 4 times before the first mile was out. In the end, it gave up of its own accord and I only really have half a race recorded. The first 10km or was pretty uneventful. The usual side stepping and slow down/accelerate depending on the crowd surges. The Phoenix Park was nice to run through and we were provided with the entertainment of the St John’s Ambulance getting their jeep stuck while trying to cross over a raised ditch. The sight of eight of them all trying to weigh down the front so that the wheels could get traction was a sight to behold.

Out of the park and into Chapelizod, across the Liffey and turn left towards Inchicore. At every SPAR shop we passed there was a samba band and cheering crowds. In fact for most of the route, there were at least some crowds. They were fantastic and surprisingly noisy. Next year I need to get a shirt with my name on it, because anyone that had one was being cheered on even more.

The half way point was reached in 1:36 which I was a little disappointed in, it was a tad slower than I wanted. But I was feeling good. I had taken on two gels at this stage, one at 6 miles and one at 12 or so. The distances were marked in a strangely Irish way. Mile markers for most of it, but then in the middle we got a 10km or other random km markers.

There was a gel station at 15 miles and that was to be my next one. I grabbed two and a bottle of water to wash it down with. I only took one and kept the other until I would need it nearer the end. There was another gel station after the 18 mile marker (possibly 25km?). In between there were people out with jellies, bananas, water, sandwiches and I’m pretty sure there would have been tea if you’d asked.

I felt pretty well throughout and didn’t hit any substantial wall, at one stage I felt like I might like to walk but that was only my head asking me was I some sort of fool to think I could do this. I answered that I was, and my head gave up. It knew it wasn’t going to win that argument. So on I plodded, sometimes it felt like I was almost floating, other times it took a bit more effort. I was almost looking forward to the hills and inclines as I managed to pass people out on them.

Pretty much all the way from Foster’s Avenue to Grand Canal Street I was alternately followed and following a girl in a yellow top, called Emer. All the crowd were giving her great encouragement and as long as I was near to her, I could soak some of it up. She seemed to be going pretty well, but with a mile left to go she dropped off my shoulder and I started to speed up a bit. There wasn’t much left now. Just a little push and I’d be home. I lengthened out my stride, and then immediately remembered why I was keeping my cadence high with shorter steps. I was running much faster that way, so back to that style again. Turning on to Pearse Street, I realised that a mile was farther than a kilometre. Imagine, it took that long for it to sink in!

Then I was rounding on to Nassau Street, a quick look at my watch. 3:08. I could hardly make the length of Nassau Street in 2 minutes? Could I? I figured it was worth a shot but there was nothing else there. I had my pace and that was that. I passed the 26 mile marker and still had more to go. These were the hardest yards of the race. Pump the arms, move the legs, get closer and then there it was. I was over the finish line in 3:11:11 according to my watch.

Then the pain hit. Once you stop, your body realises what you have put it through for the last three hours and starts to complain. Hobble over to collect my medal and finishers t-shirt. Hobble through and collect the lovely SPAR lunchbox. Hobble around the corner and look happy as a picture is taken of you and your medal. Hobble to the end of the square to see where the physio massage is, great, it’s at the end of the next side of the square. Hobble to collect your bag and then over to the massage tent. But no, it’s not a massage tent, it’s been transformed into a stretching tent. Apparantly a massage is not the right thing to get straight away. So it’s over to the kerb to put on the compression legs. Unfortunately as I am reaching down to undo my shoes, my hips start to cramp up. Straighten out my leg and my calf begins to cramp. I got the legs on in the end and spend 5 minutes doing some stretches. Then it’s off to walking again to get back and get a lift home.

I spent a few hours getting fed and watered with multiple cups of tea in Waggers’ and Ronan’s house before getting home here to write this up. It’s now after 10pm and I’m finishing a celebratory beer before heading to bed. I think I’ve earned it!

And here’s some pictures of the medal 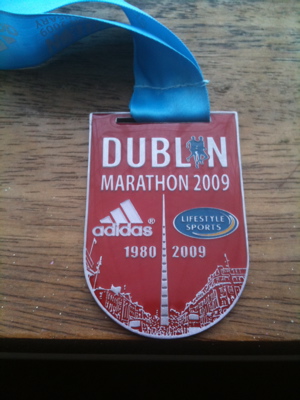 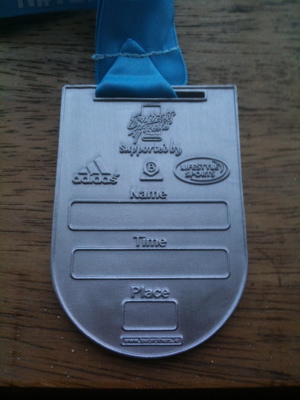